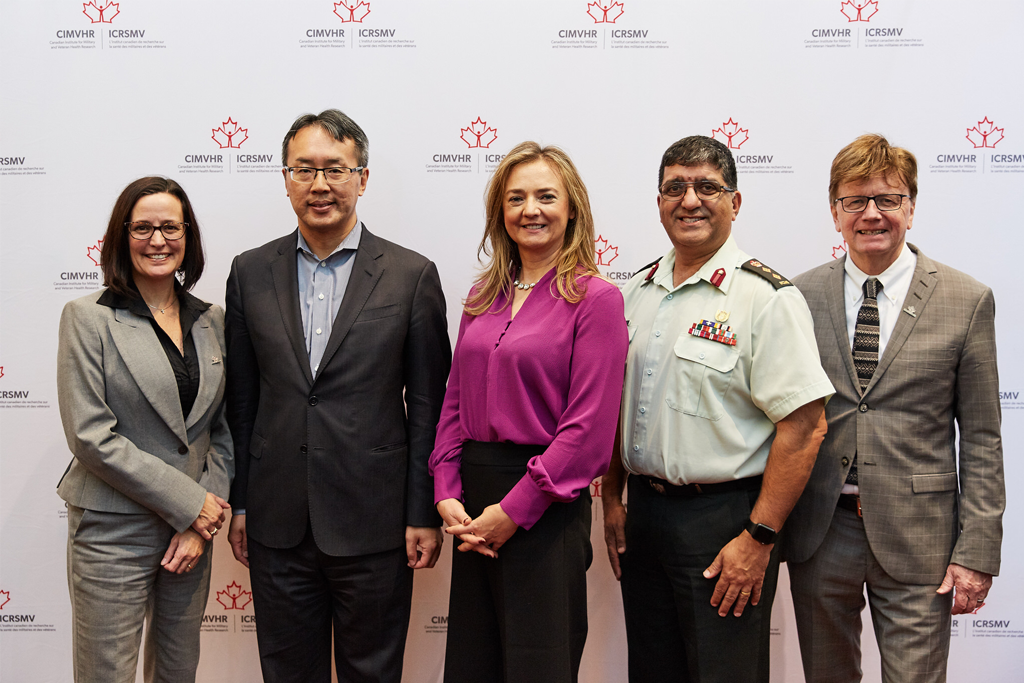 Ms. Nora Spinks once again brilliantly kicked off the event by moderating a panel discussion. Dr. Jitender Sareen, Dr. Sanela Dursun and Ms. Lacey Cranston discussed “Investing in Impact: The role of research in the lives of military members, veterans and their families."

The Forum agenda featured over 240 research presentations that were chosen from 325 abstract submissions. Under the guidance of Drs. Heidi Cramm and R. Nicholas Carleton, Co-Chairs of the CIMVHR Forum Scientific Committee, the agenda was a high-quality and diverse representation of military, Veteran and family health research happening across Canada and around the world.

Eric B. Schoomaker, MD, PhD: Integrated Comprehensive Pain Management in the US Military and VA

An element of CIMVHR Forum is to celebrate emerging scholars in the field with an event hosted by the Student and Post-Doctoral Engagement Committee. This networking event is designed to allow students to meet one another and to connect with stakeholders and leading researchers in the field. The event was supported by Wounded Warriors Canada.

Other student recognition at Forum 2019 included Ashley Williams, Queen’s University, who was awarded the Wounded Warriors Doctoral Scholarship in Military and Veteran Health Research for her research From Canadian Forces Health Services to the Civilian Heath Care System: A Study of Veteran Health Transition. In addition, Kaitlin Sullivan, University of British Columbia, was awarded the Royal Canadian Legion Master’s Scholarship in Veteran Health Research for her research Identifying neuronal subpopulation participation across the stages fear memory.

New this year: Jordana Sommer, University of Manitoba, received the inaugural Dr. Mark Zamorski Award for the research A Longitudinal Population-Based Examination of Comorbid Relationships Between Posttraumatic Stress Disorder and Physical Health Conditions Among Canadian Military Personnel. Honouring the legacy of Dr. Mark Zamorski, the award is presented annually to a postgraduate student to enhance their specialization in epidemiological and mental health problems in military personnel, Veterans and /or their families.

Four CIMVHR Fellows were announced at Forum 2019. The program started in 2016 as a way to recognize the leaders who demonstrate exceptional research advancements within the field of military, Veteran and family health and well-being. The 2019 CIMVHR Fellows are Dr. Sanela Dursun, Dr. Luc J. Hébert, Col Rakesh Jetly and Dr. Homer Tien.

A long-standing tradition at Forum is to announce a series of research awards in the final session. The following awards were presented at Forum 2019:

The Editors’ Choice Award
Sponsored by the Journal of Military, Veteran and Family Health

Awarded to Stephanie Houle-Johnson, University of Ottawa, Impact of Potentially Morally Injurious Experiences in the Canadian Forces: A multi-method analysis

The Student Research Award
Sponsored by VIA Rail Canada

We are grateful to the researchers who presented, to the sponsors who supported, and all the delegates from Canada, the United States and around the world – CIMVHR Forum 2019 helped advance military, Veteran and family health research. Thank you all for serving those who serve us. Join us October 19-21, 2020 as we take CIMVHR Forum to Halifax, Nova Scotia.