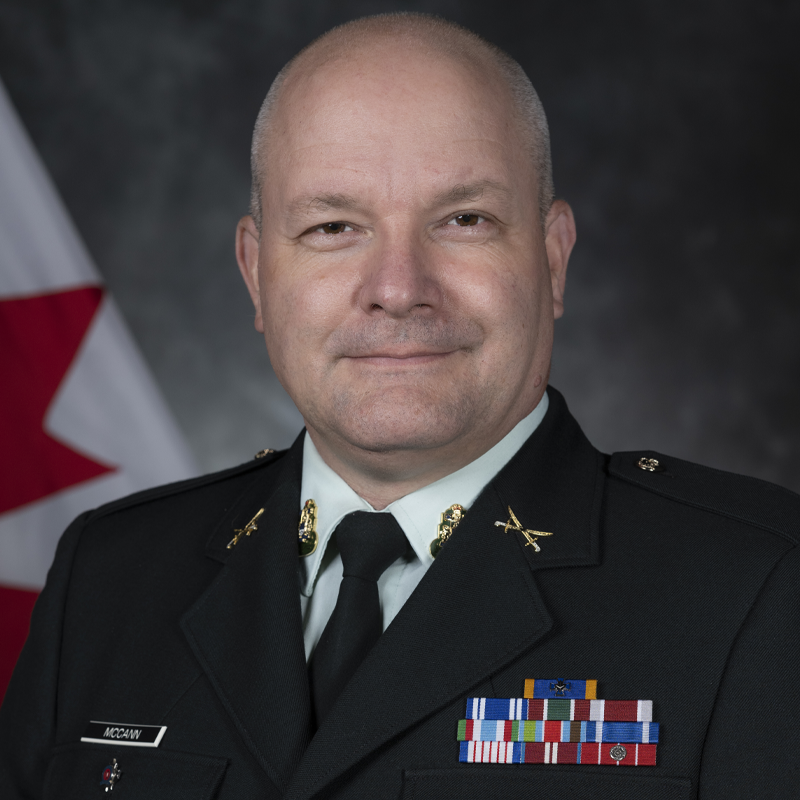 Chief Warrant Officer Bob McCann, MMM, CD, was born in St-John New Brunswick.  In 1989, he enrolled in the Canadian Armed Forces as a Mobile Support Equipment Operator (MSE Op 935).  Following his trades course, he was posted to CFB Bagotville, QC and then to 5 Svc Bn in Valcartier.  In 1995, he deployed to Croatia and was promoted to Master Corporal.

Promoted to Sergeant in 1999, he again deployed to Bosnia-Herzegovina. In 2002, as a Warrant Officer, he returned to Supply and Transportation Company with 5 Svc Bn. In 2004, he deployed to Afghanistan on Op ATHENA’s Roto 1 where he was Transportation Platoon WO and Unit Embarkation Officer for the National Support Element.

In May 2005, he was promoted to Master Warrant Officer and posted to CFB Gagetown as Transportation Company Sergeant Major.  He received the Professional Logistician designation (P.Log) in 2007 from the Advanced Logistics Officer Course (ALOC). In April 2008, Chief Warrant Officer McCann was promoted to his current rank and posted to CFB Kingston in the Land Force Doctrine and Training System.

In July 2010, he moved to Geilenkirchen Germany, as UCWO with the Canadian Forces Support Unit (Europe). Upon completion of his tour in 2013, CWO McCann was posted to Borden and appointed Formation CWO for the Canadian Forces Recruiting Group. In 2015 he moved to CFB Kingston for the second time when he was selected Formation CWO for Military Personnel Generation. CWO McCann deployed to Iraq as Op IMPACT Task Force Sergeant Major from December 2017 to June 2018. Posted to Ottawa in August of 2018, he assumed the position as Assistant Deputy Minister Information Management Group Chief Warrant Officer. In Mai 2021, he was appointed to his current position as Command Chief Warrant Officer Chief Professional Conduct and Culture.

CWO McCann is a graduate of the Joint Advance Warrant Officer Course (JAWOC), New Zealand Staff College and is a member of the Partner for Peace Consortium involved in the Defense Education Enhancement Program (DEEP) where he served as the Canadian Lead in the development of the Ukrainian Armed Forces Professional Military Education effort.

CWO McCann became a Member of the Order of Military Merit in December 2012 and was awarded the Meritorious Service Medal in November of 2019. He is married and has two daughters.