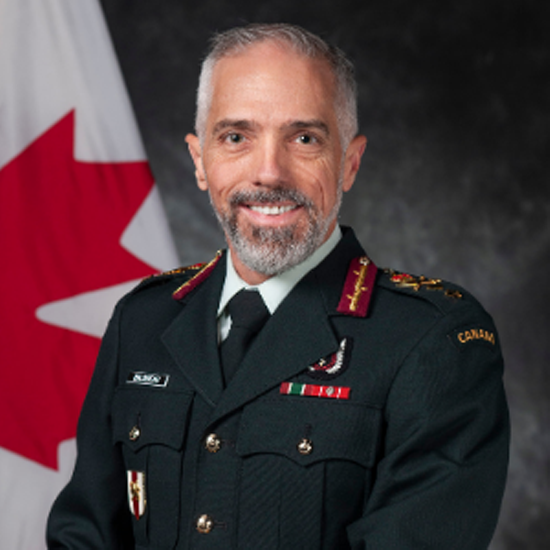 Major-General Bilodeau enrolled in the Canadian Armed Forces, under the Medical Officer Training Program, in 1995, during his third year in medical school. He completed his Residency in Family Medicine at Université Laval, Quebec City, in the summer of 2000.

Major-General Bilodeau then served as the medical officer of the 1st Battalion Royal 22nd Regiment in Valcartier for two years. From the summer of 2002 to the summer of 2003, he did an additional year of training in Emergency Medicine at Université Laval. Following his return to Valcartier, he trained for and deployed to Kabul, Afghanistan, where he was responsible for role 1 support (pre-hospital and primary care). Upon his return, he was promoted to Major and appointed as the Brigade Surgeon in support of 5 Canadian Mechanized Brigade Group, where he served until the summer of 2008. He was then posted to the Supreme Headquarters Allied Powers Europe (SHAPE) in Belgium, as the Canadian medical officer and Officer in Command of detachment Casteau of the Canadian Forces Health Services Centre (Ottawa). There, he provided family medicine support to Canadians, US and other country military personnel and dependents in a US Army clinic. He was awarded the US Army Commendation Medal for his accomplishments during this appointment.

Since 2013, he has been a surveyor for Accreditation Canada, the organization that sets the standard for patient safety and quality of healthcare in Canada. From 2014 to 2015, he completed a Master’s Certificate in public administration at l’École nationale d’administration publique. He is a graduate from the Medical Strategic Leadership Program from the US Army and the US Federal Healthcare Executives Institute. Major-General Bilodeau graduated from the Canadian Forces College’s National Security Programme and has obtained a Master of Public Administration from the Royal Military College of Canada (RMC), Kingston, in 2019.

He was awarded the Canadian Certified Physician Executive (CCPE) designation by the Canadian Society of Physician Leaders (2014, 2019); the Certified Health Executive (CHE) title by the Canadian College of Health Leaders (2017); the title of Fellow from the College of Family Physicians of Canada (2018); and the D. Fraser Holman Medallion as the student on the National Security Programme who best exemplifies excellence in strategic thought and leadership potential (2019).

He is married, together they have two daughters. He enjoys skiing, skating, biking, and running with his family.